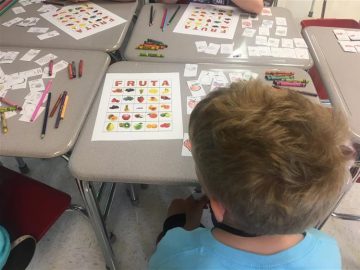 There’s a saying that goes, “Languages are the key to the world,” and Bellefonte Area School District aims to bring a more global perspective to education by offering a variety of world languages to students in the district as early as kindergarten. It happens throughout the school year in class, along with also offering kindergarten to sixth-grade students the chance to join World Language Camp for a week during the summer.

For the sixth year, the camp was held at Bellefonte Area High School to help expose students to a variety of languages – many which are offered at the district. This year, languages taught at camp were Chinese, French, Spanish and American Sign Language. All classes were taught and facilitated by teachers at the district, and provided a foundation of learning new words through song, dance, games and more.

“The teachers always pick a new theme of what they are teaching in order to keep our returning students engaged,” high school Spanish teacher Victoria Smith said.

French is offered at the high school starting in ninth grade.

And according Superintendent Michelle Saylor, offering a variety of world languages promotes a global culture of learning in a place such as Bellefonte and the rest of Nittany Valley that doesn’t necessarily have a lot of cultural diversity.

“The most important thing that I hope student get from learning languages in the classroom is they start learning that the world, as large as it is, is a really small place,” Superintendent Michelle Saylor said.

Studies show that language is best acquired in the first five years of life, and has also been shown to improve concentration and memory, along with boosting creativity. Reading, writing and math skills are also generally better in bilingual children, according to those studies.

“Not only does language learning improve cognitive function, but it helps with critical-thinking, problem-solving, listening and multitasking abilities,” Smith added.

Bellefonte Area students are able to take Spanish and Chinese 1 in eighth grade in order to receive high school credit. It also helps them achieve the highest level of Spanish in high school through an Advanced Placement course, which offers students the opportunity to earn 12 to 18 college credits.

In addition to being able to learn a second language with Spanish and French offerings at the high school level, Smith said students also have the chance to earn college credits through Saint Francis University for language levels 3 and higher. If students qualify and choose to accept the invitation, students also have the opportunity to join French and Spanish honor societies that can further provide students with scholarship and other awards and honors.

With administrative support, teachers also offer a variety of field trips to enhance the language and culture studied in their classrooms. Students can also travel to Spain and France on a department trip that happens every three years.

“Our department works to prepare students for the workforce, not just college,” Smith said. “With the growing diversity of our country, having language skills other than English will help immensely in the job market and sustaining global competencies.”