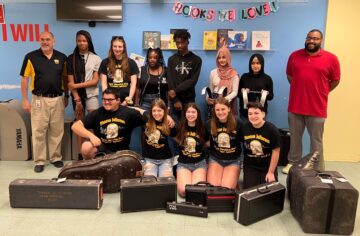 Thirteen different musical instruments were donated, including one or two of the following instruments:

“On behalf of Duquesne, I want to thank the West Jefferson Hills School District for their generous donation of instruments to the students of Duquesne City,” said Dr. Sue A. Mariani, superintendent of the Duquesne City School District. “We are humbled by their generosity as we are at the beginning of rebuilding our music program. This donation will help get instruments into our students’ hands which will hopefully begin not only a love of music, but an avenue of learning that hasn’t been offered in Duquesne for more than a decade.”

“Music is important for growth and development for young people,” stated Kimberley Finnerty, president of the West Jefferson Hills Board of School Directors. “Music is an outlet for so many people and good for your overall health and well-being. I think it’s amazing to share opportunities for all students and important to engage and partner with other communities.”