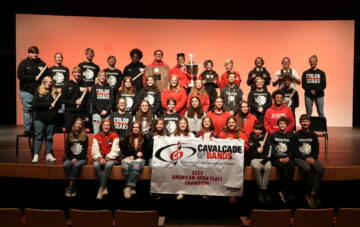 The 2022 Marching Millionaires from Williamsport Area School District with their banner, trophy and plaques.

There were 28 bands in American Class between A and Open divisions. The Millionaires achieved the highest score, and not only earned the champion title but also won awards for Best Overall Music and Visual Effect, Visual Performance, and Best Percussion section. Marching band students begin technique practice each spring and continue through the summer, learning music, marching and choreography for their show. The band performed over 20 times this fall at competitions, football games, parades and other events.

“Success on this level is the result of a process these kids buy into every day,” said band director Todd Kendall. “Designed and instructed by a dedicated, professional staff and performed by students who live every day into the Marching Millionaire culture of sustained excellence. It’s no accident that for almost five decades the marching band has been at the top of the competitive game in Pennsylvania. Many thanks to the WASD administration, school board, teachers, support staff, parents and community members for giving these students unending support.”

The competitive marching band is a part of the Williamsport Area High School Music Department, and runs like a varsity sport. Band students have the option to join. For two decades, the WASD has been nationally recognized as a Best Communities for Music Education by the NAMM Foundation. At WAHS, there are about 150 band, 150 orchestra and 200 choir students who can participate not only in the Marching Millionaires but also three orchestras, three bands, five choirs, and select groups like GQ, Les Chanteuses, Strolling Strings and Big Band (Jazz).