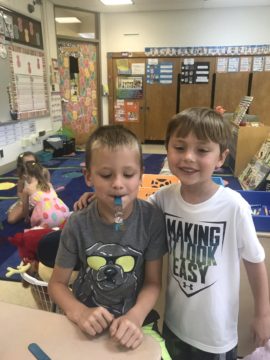 The kindergarten classes at McClellan Elementary recently read the book “Stand Tall, Molly Lou Melon.” Through the book, kindergartners learn about West Jefferson Hill SD’s core values of respect and empathy. The story is about a little girl named Molly Lou who is short, has buck teeth and a unique voice, and overcomes bullying with wise words and encouragement from her grandmother. In the story Molly Lou gets picked on by a mean boy because of her buck teeth, so she stacks pennies on her teeth to show that though her teeth aren’t like everyone else’s, she thinks hers are perfect. The kindergartners learned that that the mean boy and Molly Lou could be friends even though they are different from one another. Teachers reinforced the concepts of respect and empathy when they had the kindergartners stack pennies just like Molly Lou.