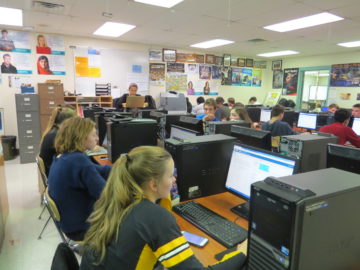 Over 165 high school students took part in Thomas Jefferson High School’s first ever Hour of Code in December 2017. The event entitled “Cocoa, Cupcakes and Code” was organized by science teacher Wendy Matta to encourage more students to take computer programming classes. The event was held in support of the global Hour of Code movement (www.hourofcode.com) which encourages educators to organize an Hour of Code event during December 4-10, 2017.

Students had the opportunity to learn basic Python programming skills and participate in activities geared for more advanced users. By the end of the event, students spent at least one hour learning about Python programming while using geometry to instruct a turtle to draw a snowflake. Computer science club students were on hand to help and offer guidance to those in need. As students sipped their cocoa and enjoyed their cupcakes, they learned more about programming from 2014 TJ alum and special guest presenter, Ritwik Gupta. Ritwik is currently a machine learning researcher at the Carnegie Mellon University’s SEI Emerging Technology Center where he works on novel applications of machine learning and artificial intelligence in the areas of imagery, health and adversarial learning. He and fellow CMU colleague Hollen Barmer, also shared their work on facial expression recognition software. Special prizes were awarded every fifteen minutes as the students honed their computer programming skills. The entire event was a sweet success!