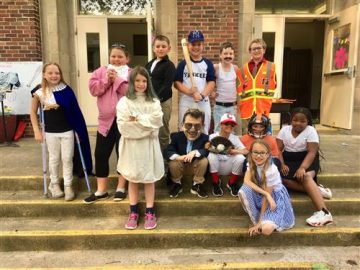 When students enter fourth grade at Bellefonte Elementary School, they get the chance to be a part of an annual class project that puts them in character of someone more famous. The project is called the Wax Museum and has been a staple at the school since the 2014-15 school year.

Teacher Lauren Whitman said during English and language arts classes, students are able to select a person to research – likely a historical figure. They’re tasked with writing a biography about the person they selected to become experts on and then create scrips for the final Wax Museum project at the end of the lesson that also comes at the end of the school year.

Staged around the auditorium at Bellefonte Elementary, students dress as their figure with props at their site. Frozen still, they then become activated when a guest presses a button. Once triggered, the student gives a speech about who they’re representing. Students and staff, in addition to family members of the fourth-graders, are invited to the event.

“It’s definitely an exciting project,” Whitman said. “The kids are motivated to do it because they’ve chosen the person they want to research and they’re interested in them in one way or another.”

The figures include athletes, astronauts, historical figures, actors and more.