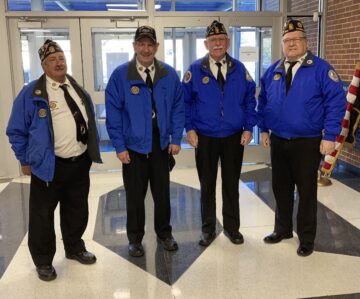 The Palmerton Area Senior High School celebrated Veterans Day with an indoor assembly for our senior students. The Social Studies department (led by Mr. Paul McArdle and Mr. Mike Gombert) celebrates Veterans Day every year. Mr. McArdle and Mr. Gombert organized an emotional and heartfelt assembly that honored our local veterans. It was not only a magnificent way to pay tribute to our veterans, but a wonderful way for teenagers to hear live accounts about World War II, the Vietnam War, and the Gulf War from the veterans themselves or their loved ones.

Mrs. Paula Husar stated, “The veterans talked about their recruitment into the military and their term of service. Some showed pictures and videos. It was touching to see so many of our students shake their hands and thank them for their service at the conclusion of the program.”

Next year’s goal is to bring in families of all the veterans, collect pictures and have a video playing in the background so that the students can see the veterans when they were much younger than they are today. The students will then be able to see them as young, brave adults who were called upon to serve our country. Additionally, the high school will seek to offer a new elective for students to take beginning in the 2023-24 school year. This class will include war items and their impact on society with research on foods, sports, music and the impact that each war/conflict had on our economy.