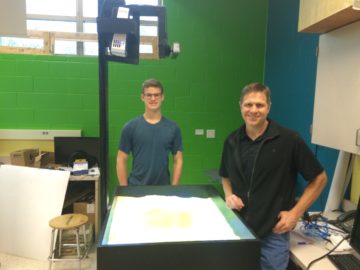 Looks can be deceiving. At the back of the classroom in the Upper St. Clair High School’s FAB Lab sits a black, wooden sand table that stands about waist high. Seemingly, the only things lacking were the small shovels, pails and other sand toys that would keep a child busy for hours.

They dimmed the lights and powered on the projector and the once simple sandbox was transformed into a virtual topographical map that adjusts instantly to the contours of the sand. Meet the augmented reality sandbox built by Upper St. Clair senior Michael Smith.

In need of an idea for his culminating project for the Advanced Engineering course, Smith turned to his teacher Fred Peskorski. Although he had previously never heard of an augmented reality sandbox, two weeks into the school year Smith was researching and learning everything he could in order to build one.

The augmented reality sandbox allows users to create and change topography models by simply moving and shaping sand. In real time, the technology projects a color-coded contour map. Dragging your hand through the sand instantly creates a river of blue water that flows with realistic motion. Make a pile of sand and you’ve created a red mountain with contour lines showing the elevation. Hold your hand over the sand and rain begins to fall, eroding the landscape.

“Basically, all of the magic happens from the Kinect, which senses how deep the sand is and how high the sand is and that sends the depth to the computer which translates it into a topographical map,” Smith said. “A high point would be red and the low points represent below sea level so that’s where the simulated water will travel.”

The technology for the project required a short-throw projector, an Xbox 360 Kinect sensor, a computer equipped with a Linux operating system and open source program that Smith was able to find online.

In total, the technology for the project totaled more than $1,000, which was funded by Sonny Bringol, president of Victorian Finance, through the assistance of Upper St. Clair’s advancement office. Director of Advancement Sheila Gorgonio was able to match the innovative project with the interests of the donor.

The actual table was built in the school’s FAB Lab with extraordinary attention to detail. The table is designed to fit through standard doorframes and castors were added to ensure that it can travel easily between classrooms and schools.

“Originally my intention was to use this in architecture class to help teach about topographical maps and site plans for students that build their houses,” Peskorski said. “As I realized its capabilities we could use this in the environmental studies classes. We could take it down to the elementary classes and let them play in sand and understand how a topographical map is developed.”

Although Michael graduated in June, his project remains in the Upper St. Clair School District. The augmented reality sandbox serves as an effective teaching tool for environmental science concepts including topography, the meaning of contour lines, understanding how water flows over a landscape, erosion, and more.