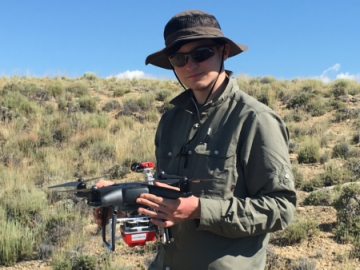 For the second year in a row, UDHS students and recent alumni had a rare opportunity to work alongside geoscientists and paleontologists as part of the (Dresher-based) Bighorn Basin Paleontological Institute’s 2018 field season. Pictured are (from left to right) Jess Robinson (UDHS ’17), Blake Nutis (UDHS ’18) and Leanna Stackhouse (UDHS ’17) in front of the impressive remains of what is likely a 148 million year old Stegosaurus. To date, the bone bed includes multiple leg bones, the pelvis, several toes, vertebrae, ribs and the shoulder of this well known dinosaur species. Based on the geology of the site, it is likely the animal died in a flood or river channel before being rapidly buried by sediment. In addition, the site is also being surveyed by UDHS senior Jonah Carver through an ongoing partnership between the UDHS advanced geosciences program and West Chester University’s Earth and Space Sciences Department. Jonah (pictured with the UAV and science payload) had the opportunity to collect data on the site using a drone-mounted multi-spectral scanner (MSS) capable of taking high resolution aerial imagery in both the visible light and infra-red portions of the electromagnetic spectrum. This data will be used in support of an upcoming project centered on using advanced UAV technology in paleontological research. The site was discovered in 2017 by UDHS advanced geosciences instructor Dr. Rick Schmidt and is still being excavated under his supervision along with other staff members of the institute. At the conclusion of the field season in mid-August, the fossils will be transported to the Academy of Natural Sciences in Philadelphia for formal preparation