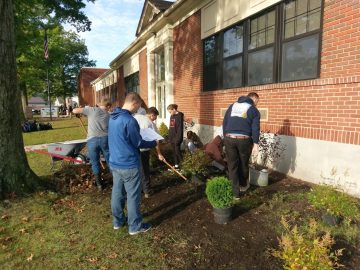 During the summer of 2019, students in the CareerLink Bridges to the Future youth program, supervised by Jesse Nagle, began the removal of the overgrown shrubs in front of the building, and Howard Elementary custodian Ricky Redman completed the process. Howard Elementary Principal Skip Pighetti and BEA Director of Building and Grounds Tom Folino then reached out to Mr. Biddle to have his students create the new landscaping.

The design for the new landscape, including plants such as hydrangea, boxwood, winterberry, and black-eyed susans, was created with input from Mr. Biddle, student Drew Koleno, and KLR Nursery of Julian, PA. According to Mr. Biddle, Drew developed all the plans and educated the stakeholders on the plants, including pictorial documents and materials for students to use on the day of planting.

The work crew that converged on the school on October 10 included a number of former Howard Elementary students. According to Mr. Biddle, updating the landscape provided a community-based project in which these students would have a vested interest. “When students are stakeholders in a project, you get excellent work. The students who worked on this project someday will have children who will go to Howard Elementary, and they can share the stories of the day they installed the landscape.”