Unified Robotics program may be the first in eastern U.S. 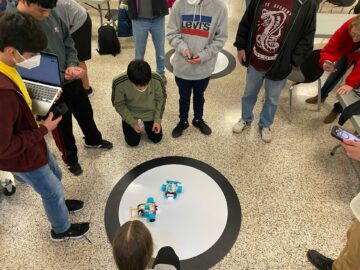 Building on its recognition as a Special Olympics Unified Champion School, Fox Chapel Area High School recently added a Unified Robotics program, the first of its kind in the eastern United States. The goal of Unified Robotics is twofold: to expose students with and without disabilities to engineering, programming and robotics, as well as to foster social inclusion, equity, understanding and belonging.

Meeting every Thursday after school during the six-week season, students without disabilities who are members of the high school’s Best Buddies organization work alongside peers with disabilities to build robots using Lego Mindstorms and Lego Spike Prime robots donated by the Lego Foundation, FIRST (For Inspiration and Recognition of Science and Technology), and The Walt Disney Co. Each small team designs, builds, and programs its own robot. On the final competition day, each team presented their robot and its features to judges then competed in a tournament-style event. Prizes were awarded to the top three teams.

Junior Hyunsu Ro says he enjoys coding the robot, making it move, and engaging it in battle.

“I want to keep coming because this is different than what you learn during the school day,” he says.

Junior Arvind Seshan is leading the program in its inaugural year, along with faculty sponsor Dr. Stacie Dojonovic, the district’s transition coordinator. Seshan says he became involved with Unified Robotics through his own involvement in similar activities.

“Robotics competitions and STEM events taught me the value of collaboration,” he says. “I wanted to bring this opportunity to students of all abilities at Fox Chapel Area. I felt that Special Olympics Unified Robotics was a perfect program because it brings together robotics, teamwork, and communication skills.”

Seshan says he doesn’t plan to stop with Unified Robotics.

“Plans are also underway for a Unified Hackathon at Fox Chapel Area,” he says. “Our goal is to pilot these programs at Fox Chapel this year and then help other schools in Western Pennsylvania start the programs as well. As a Special Olympics Unified Champion School, we can play the role of helping initiate new programs like these in our region that foster inclusion in social, athletic and academic events.”

Dr. Dojonovic, who also helps to oversee the Unified Track and Field and Unified Bocce teams at the high school, as well as the Unified Soccer team at Dorseyville Middle School, credits Seshan and his peers for their work in expanding Special Olympics Unified programs into the academic realm.

“Unified Robotics is truly driven by the students who wanted additional outlets offered for all students to build upon the already existing monthly social inclusion and athletic opportunities,” she says.

“From selecting their team name to designing and programming their robots, everyone works together and celebrates together,” Seshan adds.