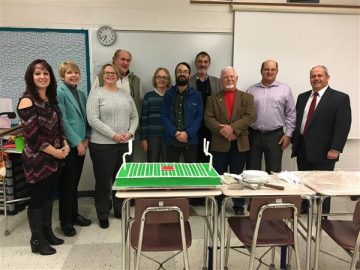 The Bellefonte Area school board received a $125,000 donation from Reliance Bank to put toward the capital campaign to help name the track at Rogers Stadium in memory of two Bellefonte graduates. That, paired with a $125,000 donation from the Jeremy Herbstritt Foundation, is making the recognition possible. The facility will now be called the Jeremy Herbstritt and Lt. Jonas Martin Panik U.S. Navy Memorial Track. Panik, a Class of 1993 graduate, was killed in the terrorist attack at the Pentagon on Sept. 11, 2001. Herbstritt, a Class of 1998 graduate, was a victim of the Virginia Tech shooting on April 16, 2007. Both were members of the Bellefonte Area High School track and field team. Family members of Herbstritt and Panik were in attendance during the presentation at the school board meeting on Nov. 20. “Jonas — he would definitely be excited about this,” Martin Panik said about his son. To read more about the $125,000 donation from the Jeremy Herbstritt Foundation, visit this link: https://www.basd.net/Page/14124. To read more about Panik and how the district honors him, visit this link: https://www.basd.net/Page/14006.