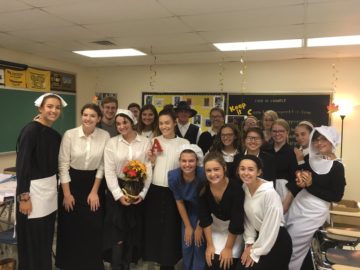 Thomas Jefferson High School students enrolled in Mrs. Kaszonyi’s AP English class have been reading Nathaniel Hawthorne’s, The Scarlet Letter. The class devoted a special day to celebrate the Puritan era and bring The Scarlet Letter characters to life. Students dressed as characters from the novel and took part in a Puritan brunch with authentic food as they socialized with classmates assuming their character identities. Students had to engage in conversation which would be indicative of their character’s thoughts, feelings, mannerisms and dialect. The students competed to see who could correctly identify the most characters from the Scarlet Letter during their Puritan Brunch. It was a wonderful way to engage and inspire students in learning character development and analysis.