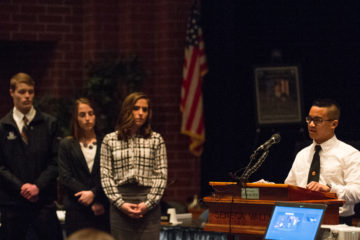 Seniors Ryan Burglund, Jess Pollaci and Jenna Pollaci, along with Nate Koneizcka, a member of the SV Class of ’17, formed the Committee to Honor Sgt. 1st Class Ryan A. Gloyer and presented to the School Board on Jan. 23.

Sgt. 1st Class Ryan A. Gloyer (SV ’00) died courageously in battle in Kunduz, Afghanistan on Thursday, Nov. 3, 2016, in support of Operation Freedom Sentinel. On February 12, members of the Seneca Valley School Board unanimously agreed to take steps that will ensure the name and legacy of this outstanding student, dedicated teacher and incredibly brave Green Beret will never be forgotten. That evening, during a regular action meeting, the nine members of the board agreed to rename the Seneca Valley Middle School (SVMS) the Ryan Gloyer Middle School (RGMS). The idea of the renaming was the brainchild of several Seneca Valley upperclassmen who were moved and inspired by Ryan’s story. Seniors Ryan Burglund, Jess Pollaci and Jenna Pollaci, along with Nate Koneizcka, a member of the SV Class of ’17, formed the Committee to Honor Sgt. 1st Class Ryan A. Gloyer. After more than a year of conducting research into the service of other Seneca Valley graduates, interviewing countless officials in the military and the community, and meeting with Ryan’s family, the group decided that the most appropriate way to honor Ryan was through the renaming of the building. “Ryan was committed to always striving for excellence,” Jess Pollaci said. “We believe that naming the building after Ryan is a fitting tribute to a true hero who walked these very halls. Through his example, we want Ryan to raise up every child entering those doors.”
For more information on Ryan, his legacy and the renaming, please visit: www.svsd.net/Gloyer.