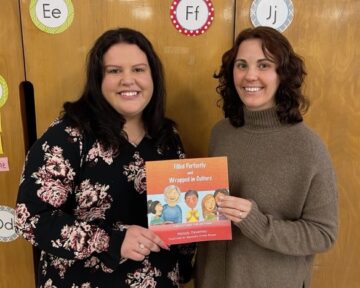 Melody Devenney and Alexandra (Aly) Bowser have taken their experiences, knowledge, skills and friendships as teachers in the West Jefferson Hills School District to produce a children’s book that was an Amazon No. 1 new release.

Devenney and Bowser collaborated on Filled Perfectly and Wrapped in Culture, A Story of Family, Food and Friends! that went on sale January 22 and moved to the No. 1 new release in Amazon’s English as a second language (ESL) category just six days later, on January 28 and stayed at the top for one week.

The book was written by Devenney, who is a K-12 ESL specialist with the Allegheny Intermediate Unit and is in her first year of teaching English to students at Gill Hall Elementary and Thomas Jefferson High School. In her fourth year overall teaching ESL, Devenney said she had the idea for Filled Perfectly and Wrapped in Culture around 8:00 p.m. on a September school night and wrote the first draft until 4:00 a.m.

The next day Devenney let her 10 ESL students at Gill Hall read the book and provide feedback. “They were excited,” she said. “They’d read it and if there was something that didn’t make sense or they didn’t like, I’d change it.”

In early October, Devenney was speaking with a Gill Hall colleague about the book when she discovered Bowser was a veteran illustrator of children’s books. They met and Bowser soon began spending a significant part of her weekends over the next three months illustrating the 32-page book.

Bowser, who is in her seventh year as an art educator for K-2 students at Gill Hall and McClellan Elementary schools, has illustrated 10 children’s books over the past 10 years. The writing and illustrations were completed in mid-January and then the wait began for the final version of their collaboration to be available worldwide.

“It was nice working with someone you know,” Bowser commented. “It was easy to get into that ‘creative mood’ and come up with the illustrations.”

Devenney said most of the book is based on personal experiences (her grandmother came to the U.S. from Puerto Rico) and that several characters are based on family members. One of the characters, a teacher, is modeled after her mother, Marisol. “She’s the reason I went into teaching.

“I cried happy tears; I couldn’t believe it,” Devenney said about finding out the book had quickly risen to the No. 1 new release on Amazon. “I never would have imagined it.”

Devenney will be donating all the profits from Filled Perfectly and Wrapped in Culture to a scholarship for an Allegheny County ESL senior who plans to attend college. Information is being distributed to all the county high schools about the scholarship and the application process will begin March 1 and extend into April.

The official Amazon overview of the book reads: Filled Perfectly and Wrapped in Culture will give you a glimpse into the life of eight middle school students from around the world who are trying to find their place in a new country. Not only do they have to learn a new language, they also have to try and fit in with an entirely new culture with different norms. Their ESL teacher is able to see the struggles her students are facing on a daily basis and works hard to show them just how special they are on the inside and outside through the use of food and diversity awareness. In this book you will learn how to find self-worth and acceptance of who you really are, all while learning to accept the similarities and differences you have with the people around you.”