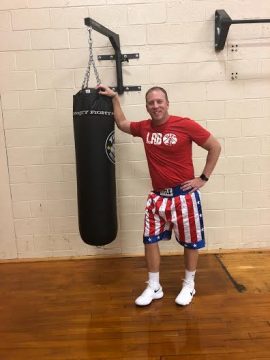 You’ve likely seen the movie “Rocky.” If not, you may still know its iconic scene of Sylvester Stallone, who plays Rocky Balboa, in the training montage as he runs up the 72 stone steps of the Philadelphia Art Museum and ends with a series of fist pumps as he looks over the city. Take that scene and bring it next month to Bellefonte — sort of. On Nov. 10, Pleasant Gap Elementary School fifth-grade teacher and Bellefonte girls’ varsity basketball coach Adam Gearhart is participating in the 10-mile Rocky Run – dressed in the same American flag-like boxing shorts Rocky wears. If it’s cold, he may even wear boxing gloves on his hands.

It’s a race that usually takes place in Philadelphia, but because Gearhart can’t make the nearly four-hour journey, he’s doing the run locally, documenting the race through photos and videos that will be posted on social media. Gearhart said he plans to run the first five miles around a route through his Springfield neighborhood and then trek the next five ending at the Centre County Courthouse.

But there’s a twist. He’s teaming up with the basketball program to help in his mission to also raise $500 for the Centre County Veterans Association.

“It’s something I’ve been wanting to do,” he said. “I love the ‘Rocky’ movies; I love the ‘Creed’ movies; and I’m going to do this and see if I can get the girls involved somehow, as well.”

Each year, the team hosts a Military Appreciation game with fundraising efforts that benefit local veteran organizations. Because the Rocky Run is being held during Veterans Day weekend, Gearhart said he wanted to make the run more than just a race.

“It’s adding the basketball aspect and the veteran aspect, and when I don’t want to get up and run, I remember what I’m doing it for and that’s motivating,” he said.

Gearhart also hopes to get as many basketball players to run the last mile with him from Bellefonte Area High School to the Centre County Courthouse. He’s been training since July and also completed a half marathon in Virginia at the end of last school year.