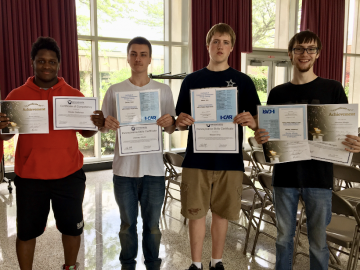 Central Pennsylvania Institute of Science and Technology held its annual awards ceremony and festivities for its secondary students on May 15. The ceremony gives instructors and administrators the chance to recognize students who have gone above and beyond.

This year’s awards included honors for attendance, leadership and high academic achievement; those who are most improved; the Sixth-Man Award and Program MVPs; and honored students for obtaining other achievements such as industry certifications. There were also cooperative education awards, the NOCTI Awards and students were honored for their participation in the state and regional SkillsUSA conferences.

Vice President of Secondary Education MaryAnn Volders said some of these awards also recognized students for their commitment and hard work that helps with skills for the future, such as the Attendance and Leadership awards.

With the Attendance Award, students were recognized in two areas: perfect attendance and students who have missed only one day throughout the school year. The Leadership Award, according to Volders, identifies students who have a vision, a drive and a commitment to achieve that vision, and the skills to make it happen.