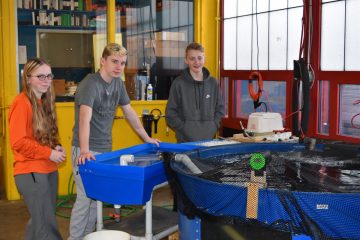 Cutline Students in Mrs. Doreen Jamison’s Natural Resource Management Class, at Meyersdale Area High School, have undertaken an unusual project that has been going “swimmingly!” The class received a delivery of 200 fingerling channel catfish in October and will raise them until the spring when they will be transported to a local fish hatchery in May. Students in this class include Carissa Miller, Dawson Mauer, Robert Rigo and Kyler Murray (absent from the photo). This project is being held in conjunction with the PA Fish and Boat Commission and the Salisbury-Elk Lick Hunting Club.

Students at Meyersdale Area High School are experiencing, first-hand, the trials and tribulations of raising fish, through a special project with the Fish and Boat Commission and the Salisbury-Elk Lick Hunting Club.

Students in Mrs. Doreen Jamison’s Natural Resource Management Class, received a delivery of 200 fingerling channel catfish October and will raise them until the spring when they will be transported to a local lake. Students in this class include Carissa Miller, Dawson Mauer, Robert Rigo and Kyler Murray.

“We started with approximately 200 catfish and we have lost a few, but they are doing well,” Jamison said.

According to Don Anderson, Meyersdale is the third Somerset County school to assist in this effort, along with Rockwood and Berlin. In year’s past, catfish raised by students have then be used to stock the Yough Dam. Anderson serves a multitude of roles in this region through his work as Nursery Manager at the Salisbury-Elk Lick Hunting club; PA Fish and Boat Commission District 4 Commissioner; and Deputy Waterways Conservation Officer.

Anderson said the Fish and Boat Commission have 150 groups, including schools, helping to raise fish for the waterways of the Commonwealth. Fish being raised include channel catfish, bass, striped bass and trout. The channel catfish being raised by MAHS were hatched out in June and were approximately an inch in length. Anderson expects them to be significantly bigger when he returns to collect them and eventually release. He expects this particular group of fish will be released in the Donegal Lake in Westmoreland County. Donegal Lake was recently rebuilt and needs to have its fishery restored.

Through the program, necessary equipment to raise the fish, including a large tank, automatic feeders and food were provided to the participating schools.

“The goal of this project is to provide students with an introduction to aquaculture and raising fish. This includes educating them on business principles of what it requires in terms of resources and time to successfully raise fish successfully. They must face issues as they arise and troubleshoot to determine what works and what is not working when things go wrong,” Anderson explained.

“This project provides students with an introduction to the work that we do at the Fish and Boat Commission and hopefully gets them interested in fishing and conservation as they become adults,” he added.