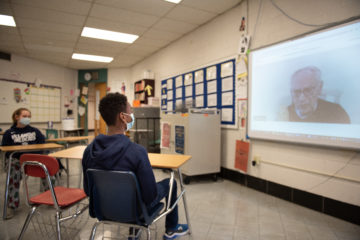 During World War II in 1945, Ernie Gross was a Jewish teenager standing in line for the gas chamber at Dachau when Don Greenbaum, an American Army corporal, and other soldiers arrived to liberate the concentration camp. Eighth graders at Colonial Middle School (CMS) recently got a better understanding of the Holocaust by meeting these two men and hearing their stories.

“The descriptions of what they saw and they felt. It was heartbreaking,” said CMS eighth grader Kasey Johnstone.

The second unit of eighth grade English language arts centers on reading The Diary of Anne Frank. The students learn about World War II and the Holocaust to give them a better understanding of what was happening outside of the Secret Annex where Anne and her family were hiding in Amsterdam in 1942. The students also explore the time period through articles, poetry, speeches and videos.

“It’s a major part of history and demonstrates the cruelty of the past,” said CMS eighth grader Jack Laverty. “It’s important to learn about the Holocaust so that we learn how to make sure it never happens again.”

Mr. Gross explained how Nazi soldiers forced his family from their home in Romania and onto train cars to a ghetto in Poland and later to the Auschwitz concentration camp, where his parents and two younger siblings were immediately put to death. He worked in labor camps and nearly starved. When he was finally too weak to work, Mr. Gross was put on a train to the concentration camp at Dachau. Mr. Greenbaum also shared what he and the other soldiers saw when liberating the camp.

“The fact that Mr. Gross held onto hope — in a time with nothing to hope for — was incredibly inspiring,” said CMS eighth grader Haley Braun.