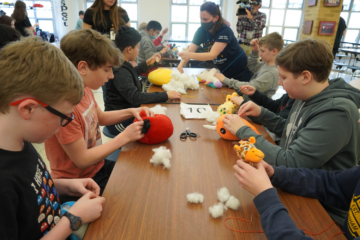 Students put squeakers inside each stuffed animal’s belly and sew them back up.

To help animal shelters, seventh grade students at Keith Valley Middle School collected and sewed stuffed animals for them. Inspired by Martin Luther King Jr. Day of Service, students toyed around with different ways they could help. “Students wanted to bring something meaningful to the school to get everyone involved and give back to the community,” said seventh grade teacher Adina Thomas.

In addition to Thomas, teachers involved in the project included Michelle Campellone, Mason Gilbert, Kate Hansico, Eric Shea, Meghan Struzinski and school counselor Jamie Devlin. After polling different service project ideas with the students, about 90 seventh grade students on Team Black voted and animal shelters won. For the first couple of weeks in March, students collected stuffed animals and raised money to donate to Glad Dogs Nation, in Langhorne. Glad Dogs Nation makes the stuffed animals dog-friendly by washing them, replacing hard eyes with flower appliques and hard noses with pompoms. They remove anything that could be harmful to dogs and then the stuffed animals are ready for the next step.

On March 16, Marianne Ahern, president of Glad Dogs Nation, brought safety-proofed stuffed animals to Keith Valley Middle School. Students put squeakers inside each stuffed animal’s belly and then sewed them back up. “The stitch in the belly represents the spay and neuter scar that we want to see on all animals,” said Ahren. Ahren demonstrated to students how to stitch up the stuffed animals and encourage them to use other stitches they might know. The only goal was to keep the squeaker inside the stuffed animal. Students could sew one or multiple animals, and also work as a team with their friends and fellow students. “I hope students learned ways they can have an impact on the world that aren’t hard and are fun,” said Ahren.

Glad Dogs Nation will send the stuffed animals to shelters nationwide, so dogs can play and cuddle with them. “Students learned how to help people, support people in need and be passionate about a cause – helping animals,” said Assistant Principal Kai Coleman-Morris.