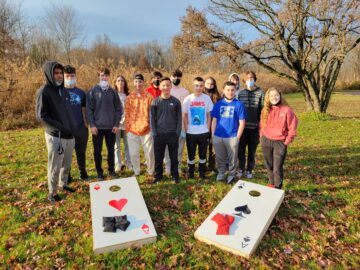 Hatboro-Horsham High School students have been hard at work building toys for children this holiday season. Nick Pompei’s first period Manufacturing and Engineering Technology class built nine sets of beanbag toss games while second period built 15 ring toss games. On December 3, Pompei’s class donated the games to Toys for Tots, a foundation started by the U.S. Marine Corps to collect unwrapped toys and distribute them to less fortunate children at Christmas. Building the games was the students’ introduction project for the semester.

“I try to get the kids to use a majority of the equipment to accustom them to it and feel more comfortable in the lab environment,” said Pompei. “They are both group-based projects, which again, helps with easing everyone into lab operations.”

Each class learned how to use the miter saw to crosscut the wood to specific lengths and how to use the table saw for width. Additionally, students used cordless drills to drill holes or screw down boards. The beanbag toss games are themed as playing cards with various suits while the table-top ring toss game features a tic-tac-toe board built into the top.

“The best part of building each game was using the new CamMaster CNC router and the Full-Spectrum laser provided to us by Hatboro-Horsham Education Foundation (HHEF) and specifically those donations came in large part from Hatboro Federal Savings,” said Pompei. “Without HHEF’s support we wouldn’t have the upgraded and cutting-edge machines that we have now.”

Students utilized the CNC machine to cut the hole for the beanbag tosses, so each hole was an exact circle and perfectly cut. For both games, students used the CNC to pocket cut holes into the top for scoring. Next, the laser cut out the scoring and the tic-tac-toe pieces, which also featured engraved emoji icons to represent player one versus player two. Meanwhile, students used the vinyl cutter to put graphics on the tops of the beanbag toss games.