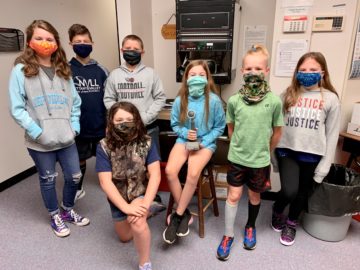 If you ask a group of fifth-grade students at Pleasant Gap Elementary School what one of their goals is for the school year, they might tell you “to go down as the best class ever to do morning announcements.” At least that’s what student Sophia Parsons said, while the other six students were excitedly in agreement.

“This year is different, because we all have to wear masks and some people may feel down about the school year, so I just want to make them happy for the day and I also want to express how I feel about going to school through how I’m saying it,” Sophia said. “I hope it wears off on others, because I love school.”

Classmate Eli Martin was the first student this school year to do morning announcements during the second week of class. He said each student announcer brings “excitement to the mic,” which, for Eli, it began with a tagline – “Good morning, Pleasant Gap” – in similar fashion to actor Robin Williams in the 1987 film “Good morning, Vietnam.”

“We introduce ourselves and do a random fact, tell them the day of the month and the school day for specials and stuff, give birthday shutouts and get them going for the day,” Eli said. “When I got it, my dad told me to do it like the movie and it was really fun.”

The campaign has been a tradition at the school for more than 15 years. It was an idea that started with fifth-grade teacher Nick Downs at Benner Elementary School, which sparked inspiration to start it at Pleasant Gap. Now, teachers Adam Gearhart, Stacey Miller and Jen Roth work with the fifth-grade students on their scripts.

“They’re really enjoying it,” Roth said. “Some kids are quiet, but it’s allowing them to break out of their shell.”

Student Brooklyn Garman said tryouts were held during the first week of school for any fifth-grader interested in being a morning announcer. Those students were given a sample script, practiced their lines and then presented it to Roth in front of the rest of the class as they would in a live situation. From there, seven students were selected. Brooklyn said “confidence and enthusiasm” were the two biggest traits that helped them make the cut.

But it can also sometimes come with nerves. To shake those off, Maddie Smith said she takes a deep breath and then “just rolls with it.”

For Addie Burn and Ty Jackson, they both said being a part of morning announcements is just something special they’ve been wanting to do for their last year at the school. Calling it a “rite of passage,” Roth said the opportunity is only open for students in fifth grade. And for Trevor Campbell-Tubbs, he’s been waiting for the chance since he was 7.

“I was new here in second grade,” Trevor said. “I had gone to three other schools in three years before that and they didn’t do (announcements), so when I came here, I thought this was finally my chance.”