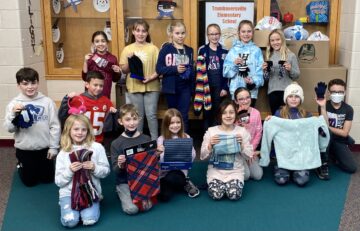 Several boxes of the items were donated Wednesday afternoon to Quakertown Community Outreach (QCO), which supports homeless and at-risk families. “It’s an awesome thing to see the kids know the importance of giving back at such a young age,” said Scott Seeger of QCO.

The idea was the inspiration of the student-led CPR Committee, two students in each class of third-, fourth-, and fifth-graders who are leaders and role models for their peers. The students are chosen by teachers and support staff.

Each month the committee meets to brainstorm ideas for spirit days and develop plans to help the community. In November, for example, they collected 800 pounds of food for the Quakertown Food Pantry. They’re currently collecting animal supplies for the Last Chance Ranch.

“This is all student-generated,” said Lauren Ziegler, the committee’s advisor. “The ideas come from them. The students are so motivated and passionate. They give up their time to come in early before school and during recess. I am so proud of them.”