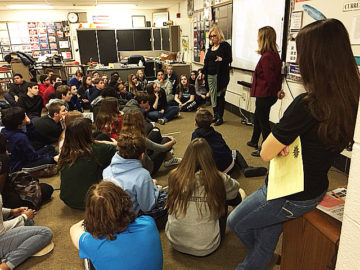 Colonial Middle School Eighth Graders will take inspiration from the Justice Bell story for a month-long project on equality.

Colonial Middle School eighth grade social studies classes recently welcomed Amanda Owen, executive director of The Justice Bell Foundation, and CMS English teacher Michele Stingle, who told the story of local women’s rights activists from the early 20th century and the journey of the Justice Bell. In 1915, the Justice Bell toured each county in Pennsylvania (and later traveled across the country) as a symbol of the women’s suffrage movement. During the trips, the clapper was chained to the inside of the bell to represent the silence of women who were not legally allowed to vote in the United States. To celebrate the ratification of the 19th Amendment that gave women the right to vote, the Justice Bell finally sounded, ringing 48 times (once for every state in the Union at the time) on the steps of Independence Hall in Philadelphia in September 1920.

For fifty years, the two-thousand-pound Justice Bell sat in obscurity on the grounds of Washington Memorial Chapel in Valley Forge National Park. It was found in the woods in the early 1990s, released to the League of Women Voters to tour in honor of their 75th anniversary and returned to go on display in the rotunda of the chapel, where it remains today. “It’s exciting to know that there’s a bell created by women for women to have the justice to vote,” said Logan Brash, an eighth grader at CMS. “It was important to our history as to how we became America as it is today.” An accompanying month-long project challenges the students to further explore women’s rights or address injustices that the students still see or experience themselves. The students are encouraged to use the Makerspace and other resources in the school’s library.

The project ties into the eighth grade social studies curriculum through their study of the United States’ first women’s rights convention in Seneca Falls, New York, which is also timed in conjunction with International Women’s Day and Women’s History Month.