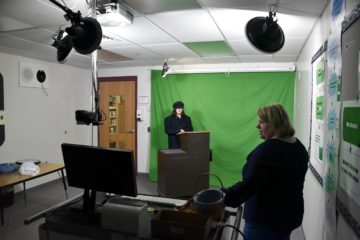 Illusion is a reality at Mount Nittany Middle School, thanks to its One Button Studio. During the 2016-17 year, the school debuted its green screen studio — the State College Area School District’s first — as an academic resource equipped with professional-grade video, audio and lighting equipment. Inside a converted office, the studio works simply. Users choose slides or the green screen for a backdrop and activate the studio by plugging in a flash drive. After an assistant pushes the record button, the camera operates until a second push. Removing the flash drive ends the session, leading to green screen editing done with software and a commercial photo archive. The technology has been a hit with both students and teachers. Social studies classes made videos in which students dressed as 19th-century abolitionists delivered speeches seemingly inside Philadelphia’s Independence Hall. The studio allowed students to rehearse and polish presentations, then share them with classmates. For a lesson about exploring towns, French teachers introduced vocabulary and phrases while “visiting” New York City. Another video involved students recording weather forecasts in German with maps projected behind them. “When you can infuse curriculum with technology, it’s where the students are at,” instructional technology coach Kelli Bowen said. “Look at the age group we’re looking at. They want to be producing videos.”