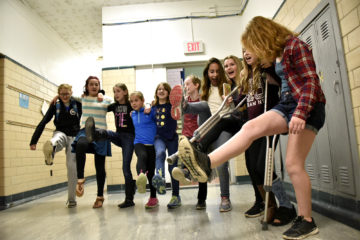 Inspired by the popularity of “Hamilton: An American Musical,” two middle school teachers created a hybrid course this year that combines performing arts and social studies. Leah Mueller and Paul McCormick — music and social studies teachers, respectively, in the district’s democratic, alternative Delta Program school — are collaborating to help 27 students learn about the American Revolution through exploring the history behind the show’s characters and songs. In addition to performing the “My Shot” hip hop number from the musical as a class, students have pursued individual projects. Three are required, and options include: singing a “Hamilton” song about Alexander Hamilton’s life or political career; researching one of his letters or essays; contrasting “Hamilton” with the musical “1776”; recording different “Hamilton” song performances into a video montage; making a rap tied to the musical or time period; and choosing an “open project” related to the course content. Along the way, students have discussed musical theatre history, comparing famous shows such as “Oklahoma” to “Hamilton,” and civics, examining why our nation’s founding fathers risked starting a revolution. The innovative course has generated rave reviews, with students saying they appreciate the diverse lessons and selection of projects. “It’s kind of a mix for musical theatre lovers and people who love American history,” student Lilly Caldwell said. “It’s so fun.”