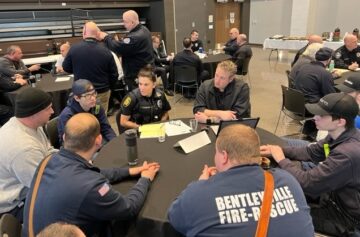 First responder units participating with WJH staff included: Jefferson Hills Police and Fire, Pleasant Hills Police and Fire, Elizabeth Police, Baldwin EMS and SE Regional EMS. Most of the first responders were scattered amongst the tables of the five district schools, while others were stationed at a central command post, which would be established within the district should an emergency event occur.

The principal at each school was given a different set of events and challenges they faced during the emergency. They had to assess the situation and determine the priority actions, collaborate with the district, first responders and local authorities, using the district’s Emergency Operations Plan as a guide.

“I thought that the exercise went extremely well,” Skrbin stated. “This exercise was a great way to build and strengthen relationships between school administrators and first responders. The West Jefferson Hills administration has made a commitment to place safety and security as a priority. Training opportunities such as this one are evidence of that commitment. The response from the police, fire and EMS agencies that serve WJHSD was tremendous; I have rarely seen a situation where all those agencies and a school district work so closely together on a consistent basis.”

“I heard a lot of problem-solving going on,” Plunkett told the group as the exercise concluded. “You had those (varied) conversations, which was great. For me, it’s about the relationships you’ve made prior to the incident. When there’s an emergency, you don’t want to be meeting someone who is local for the first time, that’s why having an exercise like this is so important. I was very excited that we all had a chance to work together and collaborate.”

Each school and district staff made notes during the exercise, which will be part of an after-action report with recommendations for the district.