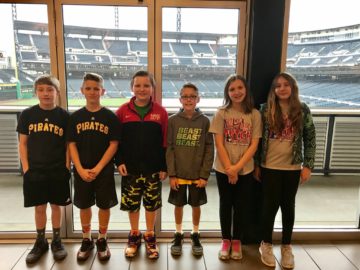 Several teams of students from St Marys Area have been brushing up on their baseball facts as part of a mathematics education program. According to the district’s Facebook page, the students competed in the Action Math Baseball program, designed to teach mathematics skills through baseball statistics in a creative way. Participants used statistics from current Pirates Players, as well as player cards they created, to compete against one another in simulated baseball games. Those who won their classroom tournaments traveled to the Pittsburgh Regional World Series Saturday at PNC Park. All 64 teams who made it to the World Series were given Pirates tickets for a future game. One team from Bennetts Valley Elementary School took fourth place overall, and received box seat tickets donated by the Pirates’ general manager.