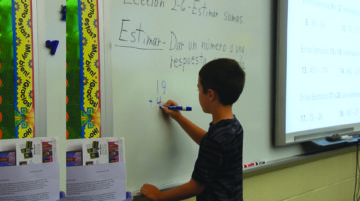 Walking into Gloria Montes-Kelly’s first-grade classroom is like being transported to another country. The bright and colorful room is creatively decorated, and every object is labeled – in Spanish.

Montes-Kelly provides the students in the Spanish Immersion Program at Liberty Bell Elementary School with encouragement, but not translation. For these native English-speaking children, Spanish is the only language spoken in their classroom. In its 26th year, the competitive program is thriving.

The Spanish Immersion Program in Southern Lehigh SD, Lehigh County, began in 1989 and was the first program of its kind in Pennsylvania. Today, there are only a handful across the commonwealth, and even fewer in public schools.