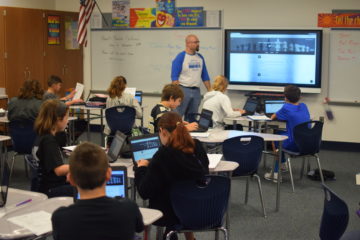 This spring, when the South Park School District Board of Directors gave the green light for a new one-to-one technology initiative for students in third through 12th grades, the purpose was to equip those students with a 21st-century tool for their success. Four weeks into the 2016-17 school year, South Park students and teachers were already enjoying the benefits of the district’s investment. In Mr. Lang’s high school astronomy class, students used their Chromebooks for several days as part of a research project on constellations. Students can access star charts, mythology, stellar magnitudes and video clips right at their desks without having to go to a computer lab. In previous years, astronomy students needed to refer to their textbooks or work from home. Lang also says the Chromebooks have allowed him to individualize projects. This helps students to work at their own pace and receive one-on-one attention.

Chromebooks are part of South Park Middle School students’ day from the moment the first bell rings. Teachers conduct their “bell-ringer assignments” through Google Classroom. It gives teachers the ability to track who has completed the assignment and who is still working on it. In Mr. Oxford’s Language Arts class, seventh-grade students use their Chromebooks to practice their spelling words before class begins. In Miss Falk’s science class, students start the day with an assignment that builds on previous lessons. Third- and fourth-grade students at South Park Elementary Center received their Chromebooks on Sept. 19 and 20. And already, the Chromebooks have become a critical tool. In one math class, students worked in teams to add and subtract two- and three-digit numbers by scanning QR codes using their Chromebooks.