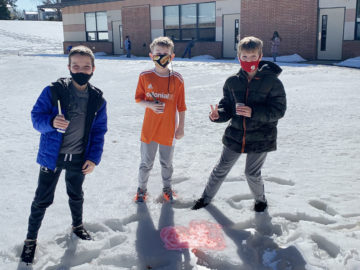 Whitemarsh Elementary School third graders used the snow as their canvas to spread kindness to other classrooms this winter, thanks to an idea from their teacher, Kirsten Henry. Ms. Henry came up with the idea after seeing her neighbor “painting” outdoors with her daughter, using a mixture of water, cornstarch and food coloring. She thought the activity would be fun for her third grade class and presented the idea to her students as a way to spread kind messages to other classrooms and teachers for Valentine’s Day. But the weather didn’t quite cooperate and the activity had to be put off for a few weeks. Finally, nicer days arrived, and the students were able to sneak out to paint their kind messages on the snow outside Whitemarsh’s classroom windows. When they were done, faculty and staff were invited to look outside and see hearts, “X”s and “O”s, and other short sayings meant to make them feel special.

“The kids loved doing it,” said Ms. Henry. “I just wanted them to be able to do something positive; it’s been such a difficult year.” Faculty and staff loved seeing the messages as well. Ms. Henry received several emails from her colleagues thanking her for sharing the love. “I got a lot of emails. Some of them said, ‘You made my day,’” said Ms. Henry.