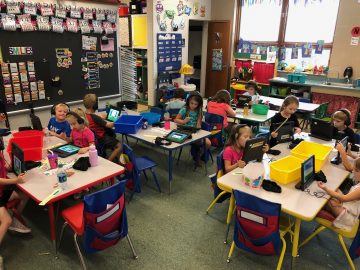 Students in the Sharpsville Area School District could see new technology in the classroom next school year. Technology integrator Kirk Scurpa unveiled a proposal for introducing Chromebooks, starting with the 2019-20 school year, during the board’s most recent meeting. The school board opted not to consider the proposal at its meeting last week, but Superintendent John Vannoy said the Chromebook program is still possible. “We’re still in the beginning phases, so I’m sure that there will be more meetings and discussion before a decision is reached,” Vannoy said. The district currently uses iPads in kindergarten and first-grade classes. Scurpa said the reaction to having iPads available in class has been positive, while Vannoy said students already show an aptitude for the technology. “Even at those early ages, we’re already seeing some students who are past the first-grade level or trying new things on the iPads,” the superintendent said. Although students do not pay an additional fee for the iPads, the Chromebooks could come at a cost of about $50 per year. After five years, the students, take them home, Scurpa said. If implemented, the Chromebooks could be used for classwork and assignments, while a proposed class could even focus on students repairing broken Chromebooks, he said. If approved, the Chromebooks would be distributed in two phases. The first, in the 2019-20 school year, would provide Chromebooks for students in seventh, eighth and ninth grades. The second, set for 2020-21, would make the technology available to students in grades 6-12.