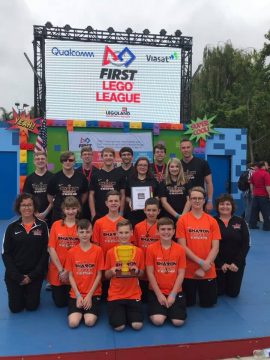 Eight Sharon robotics team members who are named on a pending patent for a firefighter hose upgrade are poised to do the work necessary to secure the rights to manufacture and distribute their invention. “We are ready,” said Sharon freshman Lucas D’Angelo. “We have already talked to some manufacturers.” Lucas and fellow freshmen Emma Barborak, Peter Wood, Jon Wareham and Kyle Wareham; and eighth graders Eli Buck, Miranda Metro and Alex Sokol, along with their coaches, Dave Tomko and Kelly Roys, put on their STEAM training caps and came up with “F.L.O.W. Alert.” The project involves attaching green lights to a fire hose, powered by a turbine that uses the untapped energy produced by the pressure of the water hose. The lighted fire hose provides an exit path from a smoke-filled area. A firefighter can also change the lights to make them blink, which would alert others to a problem. Eli explained that firefighters normally have to get on their hands and knees to find the water hose to follow it out of a burning building.

Tiger Techs Team One traveled to California and placed in the upper third of 80 teams in the LEGO First International Championships with F.L.O.W. Alert. “Which is good for judging and good for the project,” Eli said, explaining that scoring had been changed from past competitions. Team One also received help from 2005 Sharon graduate Robert Sovesky, an associate with K&L Gates law firm in Pittsburgh, worked with them to apply for the provisional patent for F.L.O.W. Alert, and donated approximately 20 hours of his time working with the team. The team has one year to delve into more specific details in order to be awarded with a patent, Tomko said. As the year progresses, the students will continue to work closely with Sovesky, local firefighters and manufacturers to secure the patent. But the most satisfaction the students take from their project is knowing that their one-of-a-kind idea could save firefighters’ lives. “Thirty-eight percent of injuries to firefighters happen while they are in the fires,” Kyle said.