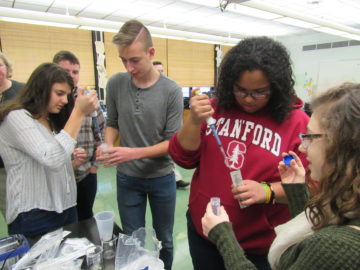 The new Molecular Genetics lab space in the intermediate high school was put through the paces for an all-day genetics lab in December 2017. A pilot group of gifted students, along with Dr. Karen Resendes from Westminster College, worked alongside IHS teachers Tom Lavelle, Patti Griest and Jenifer McMurray to identify the human genotype for PTC taste testing, using their own DNA as the source. Students began by making their own gel templates, then swabbing and isolating cheek cells. Using a thermocycler, cells were heated and cooled repeatedly to allow copying of genetic material. Finally, prepared samples were run through gel electrophoresis to allow for examination and comparing to known genotype specimens. In the end, students learned whether they were “tasters” of the bitter substance, both by tasting on test strips and verifying with a DNA match. The genetics lab came to fruition after a successful experiment in March 2017 using genetics kits. It was then decided to move forward with installation of a fully operational genetics lab/maker space. The lab experience is built in layers and includes basic genetic engineering, extracting DNA and using a CRISPR/cas9 system. Funding for the lab was provided by the Seneca Valley Foundation. Seneca Valley students now have access to technologies and training that is normally seen in university-level education.