Girls gather at Capitol to learn about leadership from female leaders, legislators 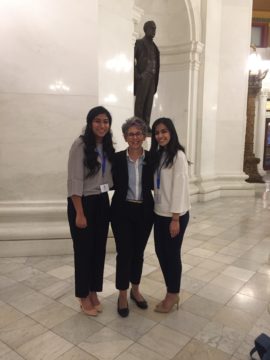 It was Oct. 21, and attendees of the Girls and Leadership Summit converged on the Pennsylvania State Capitol Building, a fitting backdrop to teach young women about serving as leaders in their schools, governments and communities. Approximately 40 students in grades 9-12 from all over the state attended the event that was organized, in part, by Arushi Subba and Tara Bhatia, two Seneca Valley seniors.

The summit keynote speaker was Anastasia Cerritelli, kindergarten teacher, who talked about “what ifs” in her personal experience in youth and government and growing up as an immigrant and coming to the United States. Workshops also were hosted by Seneca Valley senior Peyton Moore and Bryna Sherr, a Harrisburg social worker. The final workshop of the day featured State Representative Mary Jo Daley who talked about running as a female leader and the lack of female representation in the government. Other activities included a panel discussion with Representatives Margot Davidson, Marcy Toepel and Ms. Daley, as well as Dr. Patria D. De Lancer Julnes, director of Penn State Harrisburg’s School of Public Affairs.

According to Subba, a GALS founder, “I think one of the most interesting things that came out of the conference was the understanding that it was not a party issue,” she explained. “We had women from multiple fields and varying political parties reaffirming similar ideas. Being able to empower young women in assuring their qualifications and having the confidence to be the leaders that already exist within them was an amazing experience.” To learn more about GALS, visit www.girlsandleadership.org.