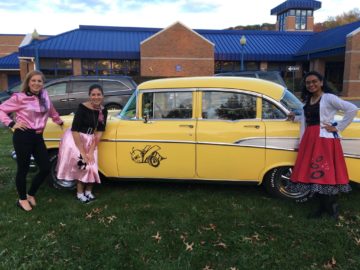 Saddle shoes, poodle skirts, leather jackets and pompadours were all the rage in the 1950s. On Thursday, Oct. 26, 2017, they were trending everywhere you looked when visiting Connoquenessing Valley Elementary (CVE) School.

CVE opened its doors in October 1957 and a substantial building project was completed in 1992. In 1997 the school went from a K-5 building to a K-4 building as Seneca Valley introduced the middle school team teaching concept, and in 2003, a six-room construction project introduced a second grade classroom wing to the building.