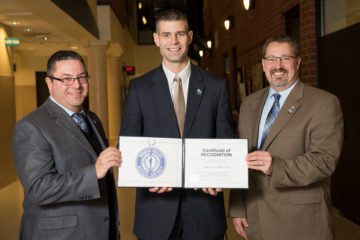 Seneca Valley Middle School (SVMS) is one of only 11 exemplary middle-grades schools in Pennsylvania to be named a 2017 PA Don Eichhorn: “School to Watch” (PA STW). The program, part of a recognition program developed by the National Forum to Accelerate Middle-Grades Reform, is an elite partnership with the PA Department of Education, the PA Association for Middle Level Education, Duquesne University, Edinboro University, Shippensburg University, Horace Mann Service Corporation and Vibra Life. SVMS is receiving this honor as a second PA STW re-designation after receiving the initial recognition six years ago. The first re-designation was awarded in 2014. “We are very fortunate,” said Bob Ceh, SVMS principal, upon learning of the re-designation. “Our staff works extremely hard to lead and guide our students in a supportive, caring and educational atmosphere. We are honored to be recognized and selected through this rigorous process by the Pennsylvania Don Eichhorn Schools to Watch Committee.” SVMS will join 34 other PA middle-grades schools recognized over the history of the program during the PA Association for Middle Level Education State Conference at the Penn Stater Hotel and Conference Center in State College on Feb. 26. SVMS will also be recognized nationally with all the other STW schools from across the country in Washington, DC, at the National Forum’s National Schools to Watch conference on June 22-24. Read more on this story on the district’s website.