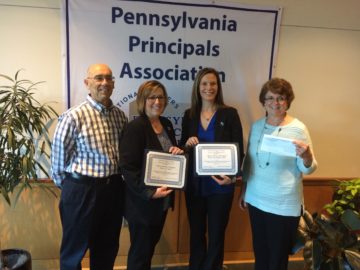 Evans City Elementary and Middle schools, along with Principals Lauri Pendred of Evans City Elementary School and Marie Palano of Evans City Middle School, were named winners of the 2016 Pennsylvania Principals Association Bob D. Schiller Memorial Cancer Research and Support Award, sponsored by Lincoln Investment Planning, Inc., for their annual STOMP Out Cancer campaign. STOMP is an acronym for Saulle’s Teddy Bear Official Memorial Parade. Over the course of eight years, the parade/walk has raised more than $120,000 with all proceeds going to the University of Pittsburgh Cancer Institute for cancer research. The principals and organizers of STOMP, including Lorraine Scarpino, retired teacher, say their main objective is to raise as much money as possible on cancer research so they can spare future families the terrible effects of cancer. The association award is presented to schools and principals who have promoted programs that support cancer research or survivors of cancer. In addition to the award designation, Evans City also received a $2,000 check to put toward future STOMP events. The STOMP Out Cancer campaign was instituted in 2007, when Evans City Elementary lost a beloved teacher, Linda Saulle, to cancer. In her memory, a walk for cancer research was organized and named after their dear friend and colleague who was known for her annual Teddy Bear Parade with her students.