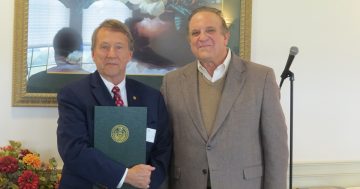 State Senator Andy Dinniman presents a special Senate citation to Jim McLeod, longtime president of the board of director of the Oxford Educational Foundation, at the organization’s 25th anniversary luncheon.

For 25 years, the Oxford Education Foundation has worked to enhance the quality of education in the Oxford Area School District by providing a mentoring and tutoring program for the students and professional grants for the faculty that encourage the development of innovative programs.

State Senator Andy Dinniman recently joined members and supporters of the foundation to mark the milestone anniversary at a celebratory luncheon at Wyncote Golf Club.

“Since its creation, the Oxford Educational Foundation, and all of its members and contributors, have worked to make great strides in improving and expanding the programs and opportunities in the Oxford Area School District,” Dinniman, who serves as Minority Chair of the Senate Education Committee, said. “For 25 years this organization has helped shaped the lives of students, families and teachers. And now we look forward to the next 25 years of growth and success.”

In addition, the OEF has helped launch innovative STEAM (Science, Technology, Engineering, Art and Math) programs like Oxford Robotics, and Band to Orchestra, which supports the addition of a string component in music education.

Dinniman also recognized Jim McLeod, who has served as the Executive Director of the Oxford Senior Center for more than 15 years and president of the OEF for seven years, among many other local, county and state community boards and leadership positions. In 2017, he was awarded the Southern Chester County Chamber of Commerce’s Outstanding Citizen of the Year Award. In recognition of his work, Dinniman presented McLeod with a special Senate citation.

“Jim is an old friend who has dedicated his life to the community as a tireless beacon of civic service,” Dinniman said. “It is an honor to recognize him before the Oxford community – a community that he has dedicated so much of his time, energy and love to.”