Safety at heart of QCSD agreement with BusPatrol 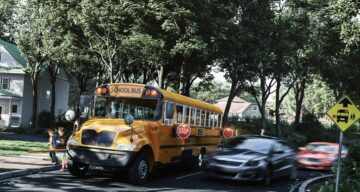 As students exit a school bus, which has its red stop sign extended, blurred vehicles illegally speed past the bus instead of stopping, putting the students in danger.

BusPatrol’s camera system is positioned to capture vehicles that pass a school bus while the stop arm is extended and flashing red lights are activated. Law enforcement, through QCSD partnerships with Quakertown Borough, Richland Township and state police, will review the footage to determine whether to issue a violation by mail.

“I love this,” said board member Todd Hippauf. “I think this is a no-brainer.”

Janet Pelone, Quakertown Community School District’s Director of Transportation and Pupil Services, said “We hope this program will help bring awareness to the community to be more careful around school buses at any time of day. We want everyone to get where they are going, but to do so safely.”

Levy School Buses drivers have spoken positively of the program, which is in line with PA Motor Vehicle Code Section 3345, and is scheduled to begin in mid-September.

Pennsylvania’s Operation Safe Stop reported more than 250 illegal passes in just one school day in 2021, and reports estimate that state school buses are illegally passed 2.18 times per bus per day. Quakertown is no exception. Over time, this safety initiative seeks to curb dangerous driving behavior around school buses.

In addition to automated enforcement technology, Levy School Buses will be outfitted with other critical safety features, including interior cameras, GPS tracking, and emergency response solutions. All of this technology has been provided at zero cost to QCSD taxpayers as the program is 100% violator-funded.

Once law enforcement confirms that a violation occurred notice is generated by BusPatrol and sent to the registered owner of the vehicle. No points are assessed to the vehicle’s owner. The violation is $300, with $25 going to a state student safety grant, $25 to the local police department, $100 to QCSD and $150 to BusPatrol.

Pennsylvania’s School Bus Stopping Law requires drivers to stop at least 10 feet away from school buses that have their red lights flashing and stop arm extended. That’s considered the Danger Zone — the area on all sides of the bus where students are in the most danger of not being seen by the driver (10 feet in front of the bus where the driver may be too high to see a student, 10 feet on either side of the bus where a student may be in the driver’s blind spot, and the area behind the school bus).

Motorists must stop when they are behind the bus, meeting the bus or approaching an intersection where a bus is stopped. Motorists following or traveling alongside a school bus must also stop until the red lights have stopped flashing, the stop arm is withdrawn, and all children have reached safety. This includes undivided highways, such as Route 309, for example.

“This is one of the most serious traffic offenses that’s impossible to enforce the way it’s set up right now unless you have video pictures,” board member Chuck Shermer said.

According to the National Association of State Directors of Pupil Transportation Services, drivers across the U.S. are reported to drive past stopped school buses 17 million times a year.

Board President Jon Kern and Director Glenn Iosue voted against the agreement. “It increases the surveillance state, which kind of gives me a pause,” Mr. Kern said.

Richlandtown Borough Mayor Wayne Codner said “It would be a great help in keeping the children safe.” And Quakertown Councilman Jonathan Sell said, “The borough is on board with this.”