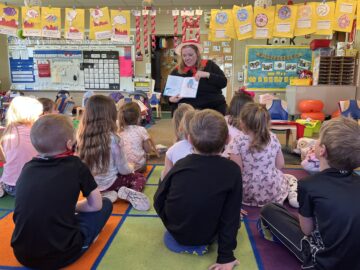 Patty Correll has a knack with kids. Even though the longtime teacher is now retired, she still finds her way back to Marion-Walker Elementary School doing what she loves – working with students. On March 2, she dressed up as the Cat in the Hat character and stopped by classes to read books to students for a Read Across America event that annually celebrates the life of the author known as Dr. Seuss on what would have been his 118th birthday.

As soon as she walked into Kylie Kling’s kindergarten class, the students squealed in excitement with claps and jumps and bounces as they sat on the carpet listening to Dr. Seuss stories she read to them. Calling Green Eggs and Ham a memorable book, Correll said it was the first book she learned to read by herself as a child. She shared the book with the class that then worked with Kling on a word project that allowed students to tap into their inner Dr. Seuss with rhyme games and a craft. They were tasked with finishing the sentence, “I will not eat them on a…” with a rhyme such as “box with a fox” or “boat with a goat” and more.

At school during the rest of the week, students were encouraged to read other books for a Read Across America map project that allowed them to log all books (or chapters) read with their teachers and, after a tally, a mile was collected for each book or chapter read as a way to record mileage across the country. Project organizer and reading intervention teacher Katy Haagen said the route started in New Jersey with a goal for students to read enough books to make it to the California coast, which would be 2,959 miles. On Friday, the final tally was 4,695 — enough miles to make it to Hawaii.

As a reward, Monday will be Hawaiian theme day at school. Fifth-grade teacher Mykayla Hubbs also had the winning class with the most books read, and will receive a cookie party for the students’ effort.