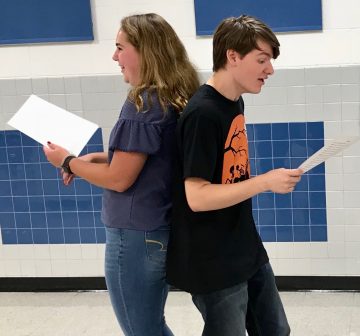 Quakertown Community High School students take part in a workshop taught by professional actors as they learn stagecraft prior to seeing the play Macbeth.

“It’s eye-opening,” Nolan Hibsman, a Theater student, said after a morning workshop. “It showed us what acting at the professional level really looks like. I’m just so thankful that the school gives us access to engage in this type of learning activity.”

That access comes from the efforts of English teacher Nick Burch, who helps bring The Linny Fowler WillPower Tour, the centerpiece of the Pennsylvania Shakespeare Festival’s educational programming, to the high school. Named for Marlene “Linny” Fowler, a supporter of theater and education, the program honors her endowment. Several of her grandchildren have graduated from QCHS.

Mr. Burch, who has taught in the district for 19 years, said the workshops, led by professional actors, help students “breakdown the stigma associated with Shakespeare. Every year our students choose to make it a great 45 minutes, where they have this great memory, and that’s what matters to me. They’re not in a classroom at a desk taking a quiz. They’re recharged now.”

The students in Advanced Placement Literature, Theater and Journalism classes participated in the sessions and got to see Macbeth.

Jolly Ekpe, a senior, agreed. He said reading Shakespeare is impactful, adding, “It’s very important and I commend that. But the acting aspect adds another element to the words. Having the opportunity to read it and to perform it adds to the perspective.”

One of the actors, Dane McMichael, a graduate of Pennridge High School, said that working with the students is “very energizing. They are eager and kind participants, which is rejuvenating. Stage Combat is a specialty of mine, and when everybody is having fun that’s super exciting to me. The process helps people realize that Shakespeare is cool.”