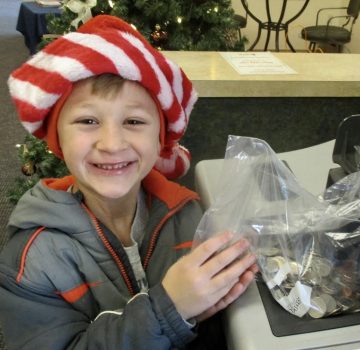 Second-grader Caleb Byelich inspired a fundraising effort that yielded more than $1,700 for a homeless shelter.

At Neidig Elementary School in the Quakertown Community School District, inspiring greatness is part of the school’s mission. Second grader Caleb Byelich is a shining example of what can be done when that mission is accomplished.

Caleb, who was inspired to help others, worked to raise $50 to buy food for the Quakertown Food Pantry. After that donation, he wondered how he could help more people. With the assistance of his parents, he learned about homelessness. He also worked with his teacher, Mrs. Rivera, during the class goal-setting process. His initial goal was to raise $100 for Advocates for the Homeless of Upper Bucks, which operates the Upper Bucks Code Blue Shelter.

Caleb came up with the idea to sell hot chocolate and baked goods to raise money. He made signs and flyers for the event, and the idea started to spread. Like all good leaders, Caleb asked his friends for their help, too. Many people were inspired by Caleb’s idea, and it became a community event. Friends played musical instruments, many people donated items to sell, and it became an awesome project.

Caleb far exceeded his goal as he and his family presented a $1,715 donation to the shelter.

“We are so proud of Caleb and his supportive family for raising more than $1,700 for a homeless shelter,” Neidig Principal Scott Godshalk said. “He is inspiring greatness at Neidig and in our community!”