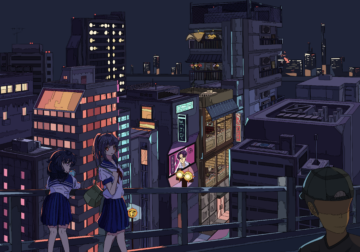 This digital artwork by Quakertown Community High School senior Thien Cao is titled “Strolling.” The drawing is made up of approximately 200 layers and took 18 hours to complete.

Quakertown Community High School senior Thien Cao has been named a Philadelphia regional winner of a Silver Key in the Scholastic Art & Writing Awards Contest for his digital art entry.

The Scholastic Art & Writing Awards is the longest-running, oldest, and most prestigious literary and art competition in the United States, aiming to find creative works and original technical skills by students in grades 7-12.

“This is a prestigious award and I’m so proud of Thien for his hard work,” Digital Art teacher Amy Migliore said. “He represents us well.”

Thien said he was “so excited” when he learned of his award. “I felt like I was living the moment that my younger self would dream of.”

Thien’s work, titled “Strolling,” is a digital drawing made up of approximately 200 layers. He said it took him 18 hours to complete.

In a letter announcing Thien’s award, Pearl Schaeffer, CEO of the Philadelphia Arts in Education Partnership, stated, “This is a remarkable achievement for you. Your work was recognized by a panel of creative professionals as the most outstanding work submitted among your peers.”

Since 1923, the Awards have recognized some of America’s most celebrated artists and writers while they were teenagers, including Tschabalala Self, Stephen King, Kay WalkingStick, Charles White, Joyce Carol Oates and Andy Warhol. “We are proud to count you among these esteemed Scholastic Awards alumni,” the letter states.

“I was really kind of shocked that these professionals recognized my work,” Thien said. “It’s a weird feeling.”

Others have taken notice of Thien’s art talents. He is one of five QCHS students to highlight QNB Bank’s 2022 calendar. His pen and ink drawing for the theme “Industry & Invention” adorns the month of May.

Thien, who emigrated to the United States from Vietnam as a middle school student, said he plans to study pharmacy after graduating. He’s currently taking three Advanced Placement classes: Physics, Psychology and Statistics.

While being a pharmacist is his number one goal, Thien said he’ll continue exploring his artistic talents. “Art is a lot of fun,” he said. “Who knows? It could open up a new future for me.”