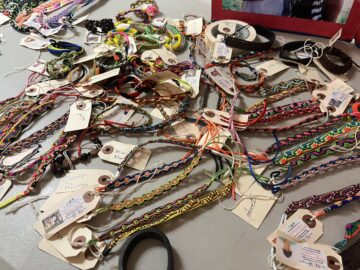 World language teachers at Bellefonte Area High School found a way to make the most of a week dedicated to promoting different languages, in addition to helping give back to a community of people and the culture they sometimes learn about in class.

The Pulsera Project kicked off World Languages Week on Monday with Spanish class lessons about a project that aims to promote fair trade and further educate youth about different cultures that are often oppressed – particularly those in Guatemala and Nicaragua. After watching a 12-minute video about the initiative, students said it gave them a better understanding of the mission to help an area that was shown through the eyes of Americans who live there. A shortened version of the video was also put on the school’s morning announcements for the student body outside of Spanish classes.

“It’s important for our students to see what’s happening in other parts of the world,” Spanish teacher Victoria Smith said. “It helps in the understanding of culture and global competency.”

As a service project, students from the Spanish Honor Society have helped benefit the program by selling pulseras, or bracelets, that will last through March 25. Selling for $5, each hand-woven bracelet is made by a member of the Central American communities it benefits, and is purchased by organizers of the Pulsera Project, who then distribute the bracelets to participating schools and groups to further support the campaign. All money raised goes back to the organization, which then benefits Central American communities to better promote employment, education and positive impact.

According to its website, “the Pulsera Project is a nonprofit organization that educates, empowers, and connects Central American artists with students in more than 3,000 U.S. schools through the sale of colorful handwoven bracelets, or pulseras in Spanish.” One of its goals is to “brighten” schools with art and compelling cultural education while employing Guatemalan and Nicaraguan artisans, and investing proceeds to create lasting change in Central American communities.

Bellefonte was provided with 500 bracelets, which they hope to at least sell half, which would allow them to raise more than $1,200. Any bracelet that is not sold will go back to the Pulsera Project to distribute to another school or group until it’s sold.

Smith said she learned about the Pulsera Project through an online professional networking group. She added that she was then inspired to bring it to the high school not only to promote community service among students, but also complement in-class curriculum.

On Wednesday, the classes held a final party, or fiesta, to end World Languages Week, while also continuing with another project called Locura de Marzo – a global music contest that allows students to vote on their favorite songs in a worldwide bracket competition. Created by an educator from Ohio, Locua de Marzo connects teachers and students from across the world to work daily with Spanish music from a variety of artists in what is similar to a bracket – or March Madness – style voting system.

Smith said her and fellow teacher Emily Zimdahl-McManus’ classes watch two videos each day and then students fill out their brackets, which they can then log online and follow – in live time – other student votes, as well. More than 1,235 schools are involved in the activity from every state and several countries, including Canada, England, New Zealand, Poland, Singapore, Vietnam and more.

Music selected for the vote is diverse, educational and class-appropriate.