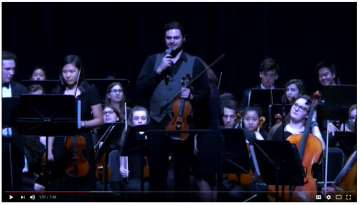 Tom Krumm introduced the piece and even sat in with the orchestra for the performance at the 2018 PWHS Spring Concert.

The Plymouth Whitemarsh High School (PWHS) Orchestra debuted a work by PWHS 2014 graduate Tom Krumm at their spring concert. The piece, titled Slippery Slope, was originally written by Jay Unger, a famous fiddle player who owns the Ashokan Fiddle and Dance Camps in Saugerties, NY. Krumm arranged the piece for string orchestra in 2017.

“It is exciting, because Tom is such a smart and talented musician. He could be playing his music anywhere, yet he is coming home to share his music with the PWHS orchestra,” said Elise Derewitz, orchestra director at the high school. “He has been in to a few of our rehearsals, and he has inspired the students to work hard.”

After graduating from PWHS, Krumm earned his bachelor’s degree from the prestigious Berklee College of Music in Boston and has returned to the Philadelphia area to teach and perform.