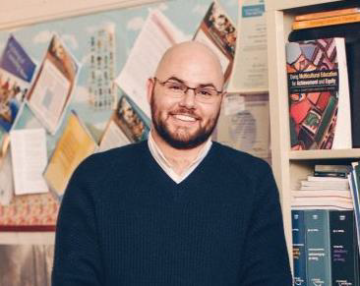 The Association of School Psychologists of Pennsylvania (ASPP) recognizes Isaac Tarbell as one of two named School Psychologist of the Year. Mr. Tarbell, who serves as the district’s psychological services supervisor, earned this statewide award for his commitment and advocacy to providing mental and emotional services to PPS families.

“I am grateful for the recognition by ASPP and all those supporting public education in Pittsburgh. It is truly an honor to serve and be recognized at this level and to continue advocating for best practices in the field of School Psychology,” said Isaac Tarbell.

During his tenure at Pittsburgh Public Schools, Mr. Tarbell has advocated for an expanded and more comprehensive role for school psychologists, an increase in equitable practices, and a greater emphasis on prevention and intervention efforts. Through examination of the District’s behavior data, Mr. Tarbell restructured the emotional support programs to include research-based social, emotional, and behavioral interventions.

To further his efforts in providing equitable and evidence-based practices, Mr. Tarbell has advocated for an improved school psychologist-to-student ratio, and during his tenure he has realized an increase in school psychologists in the district for 14 to 21. In addition, Mr. Tarbell has promoted mental health intervention through the implementation of Youth Mental Health First Aid Training for over 500 educators, as well as BrainSTEPS training for 15 staff members, which assists students returning to school following an acquired brain injury.