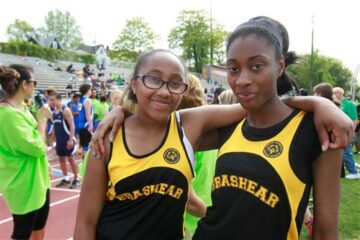 Special Olympics Pennsylvania (SOPA) and the Pittsburgh Public Schools are expanding their partnership as part of Special Olympics North America’s new initiative, Unified Champion City Schools (UCCS). The goal of UCCS is to bring Interscholastic Unified Sports® (where students with and without disabilities train and compete as teammates), Inclusive Youth Leadership and Whole-School Engagement into all Pittsburgh Public Schools with a special education population over the next three years.

For the past seven years, SOPA and the Pittsburgh Public Schools have been strong partners, conducting Interscholastic Unified Track and Field and inclusive youth leadership in eight high schools. The new UCCS initiative will grow this partnership and amplify the Unified Champion School programming that is already in place.

During the 2021-22 school year, Pittsburgh will continue to have Interscholastic Unified Track and Field at eight high schools in the spring season, while adding Interscholastic Unified Indoor Bocce at 10 high schools. Additionally, there will be a first-time program focus on middle school UCCS programming with eight schools conducting intramural Unified Indoor Bocce. All of the schools also will have inclusive youth leadership clubs that conduct whole school engagement activities designed to promote the values of inclusion, diversity and empowerment among students with and without disabilities.

“We are thrilled to be part of the new Unified Champion City School initiative, which will allow us to expand our amazing partnership with Pittsburgh Public Schools,” said Matt Aaron, president and CEO, Special Olympics Pennsylvania. “Urban school districts encompass some of the most underserved communities in our country. We look forward to working together to grow our Unified Champion Schools programming in Pittsburgh and amplify our impact on students with and without intellectual disabilities.”

“At Pittsburgh Public Schools, we are committed to maintaining safe, welcoming and inclusive environments for our students and staff. We are grateful to be among 29 urban school districts selected for the Unified Champion City Schools distinction,” said Superintendent Anthony Hamlet. “We know that all students gain through their participation in Unified Sports. We look forward to expanding our high school program to add Indoor Bocce, as well as adding Indoor Bocce as a middle grades program at eight schools throughout the district.”

A Special Olympics Unified Champion School has an inclusive school climate and exudes a sense of collaboration, engagement and respect for all members of the student body and staff. There are 222 schools in 38 counties throughout the state currently participating in Special Olympics Unified Champion Schools programming in Pennsylvania, and more than 7,600 schools across the country engaged in the program. The new Unified Champion City Schools initiative will look to expand this programming in 29 urban districts nationwide, including Pittsburgh, Philadelphia, and York. This initiative is generously funded by the Office of Special Education Programs (OSEP) at the U.S. Department of Education. The DICK’S Sporting Goods Foundation also is providing funding support specifically for the partnership between Special Olympics PA and the Pittsburgh Public Schools.