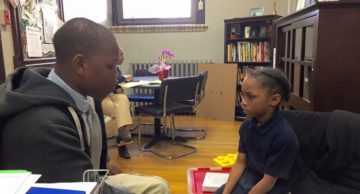 One of the Men of Mitchell helps a younger student during a mentoring session.

Weir Mitchell Elementary School’s Men of Mitchell mentoring program is helping students make strides inside and outside of the classroom. At the start of the 2015-16 school year, Donald Lewis, a school police officer at the Philadelphia SD school, began the program mentoring 10 seventh- and eighth-grade boys who showed leadership potential but weren’t academic high-achievers. His goal was to create a group of students that might serve as much-needed role models in the school.

Principal Stephanie Andrewlevich says the program began to have a positive impact on the behavior of the participants – they began wearing ties to school and showing more appreciation to teachers and administrators. They even adopted elementary school students and began mentoring some of them. In time, the group’s behavior affected the whole school community, infusing a sense of school pride.

The story spread to the media, and community groups began offering the Men other mentorship opportunities and chances to tour businesses and organizations in the community. Although some members left the group, they ended the year with 12 participants.

The group and its participants continue to grow. This school year, the Men plan to help start a Women of Mitchell group and a class-wide mentoring program between the eighth-graders and younger students.