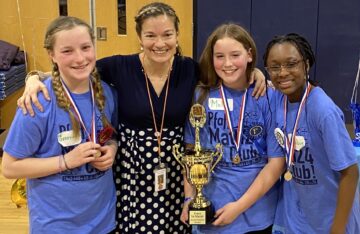 Pfaff Elementary edged Richland Elementary in a razor-thin Math 24 Tournament, the first held in the Quakertown Community School District since 2019 due to COVID restrictions. Molly Felten of Pfaff was the individual champion, followed by teammates Genevieve Skinner (second) and Debbie Adebayo (third). Declan Mooney of Richland rounded out the top four in the competition among fourth and fifth graders at Quakertown Community High School, where district families filled the upper gymnasium.

“The students performed at a very high level,” said Peach Draper, who coordinated the event. “It was incredible to see them working out their math skills while under pressure. It was also a pleasure to see all of the schools come together with huge support from the community. The night was an incredible culmination of hard work and dedication to math. I am beyond proud of Pfaff for not only winning but for training together and pushing each other. I hope all five schools could join forces and continue to grow the game of Math 24.”

Pfaff won by a 297-292 score over Richland, which had captured four of the previous five competitions. Trumbauersville was third, followed by Neidig and Quakertown.

Mrs. Draper praised the champions for being “extremely motivated. We practiced every week and on any brain breaks or when classwork was completed the kids wanted to practice more cards. They gave up their recess time to practice and often would be seen working out cards in the lunchroom, pods, car ride lines, and everywhere they went.” She said all 40 students who competed are outstanding, hard-working young people who should be extremely proud of their accomplishments. “These are the top eight Math students from each school,” she said. “They are working through something very difficult, spending lots of extra time on it, and it’s going to help lead them to success in the following years.”

The tournament could not take place, Mrs. Draper said, without the extra time put in by dedicated teachers, who work with students during recess and lunch periods to help prepare them for the competition. Math 24 “gets kids excited about Math while reinforcing skills and strategy,” said Dr. Erin Oleksa-Carter, supervisor of elementary programs. “And when you include the competition, the kids have to incorporate teamwork, cooperation, and problem-solving.” She praised Mrs. Draper for “stepping up to run the competition” and Pfaff instructional aide MaryEllen Suhadolnik for her extraordinary work. “It’s teacher leadership that makes events like this possible,” Dr. Oleksa-Carter said.